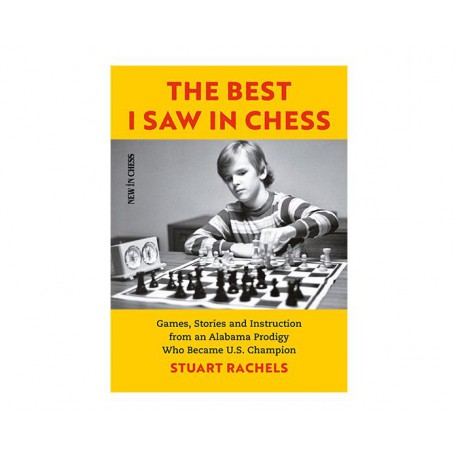 Rachels - The Best I Saw in Chess
Précédent Suivant

Rachels - The Best I Saw in Chess

Rachels - The Best I Saw in Chess. Livre en anglais sur le GMI Stuart Rachels. At the U.S. Championship in 1989, Stuart Rachels seemed bound for the cellar. Ranked last and holding no IM norms, the 20-year-old amateur from Alabama was expected to get waxed by the American top GMs of the day that included Seirawan, Gulko, Dzindzichashvili, deFirmian, Benjamin and Browne.
Instead, Rachels pulled off a gigantic upset and became the youngest U.S. Champion since Bobby Fischer. Three years later he retired from competitive chess, but he never stopped following the game.
In this wide-ranging, elegantly written, and highly personal memoir, Stuart Rachels passes on his knowledge of chess. Included are his duels against legends such as Kasparov, Anand, Spassky, Ivanchuk, Gelfand and Miles, but the heart of the book is the explanation of chess ideas interwoven with his captivating stories.
There are chapters on tactics, endings, blunders, middlegames, cheating incidents, and even on how to combat that rotten opening, the Réti. Rachels offers a complete and entertaining course in chess strategy. At the back are listed 110 principles of play—bits of wisdom that arise naturally in the book’s 24 chapters.
Every chess player will find it difficult to puthis sparkling book down. As a bonus, it will make you a better player.
Stuart Rachels (b. 1969) is an International Master who retired from chess when he was 23. He works as an Associate Professor in the Philosophy Department at the University of Alabama and has edited new editions of books by his father, the famous philosopher James Rachels.