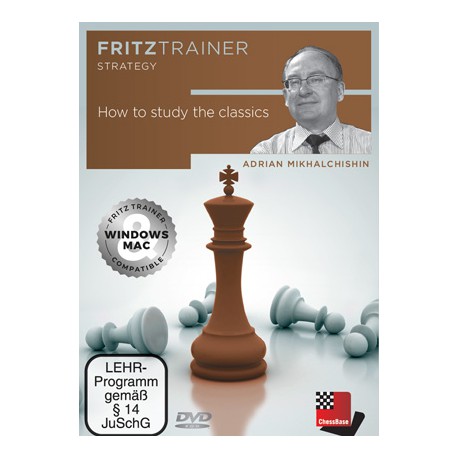 DVD Adrian Mikhalchishin - How to Study the Classics

DVD Adrian Mikhalchishin - How to Study the Classics

Chess education is based on examples of great players of the past. Most of the typical methods of attack, analogous plans and correct ways of conducting different endgames happened for the first time in their games. On the basis of these games, numerous books have been written about endgame subjects and endgame technique. Even concerning openings, the great Alexander Alekhine said that theory is simply the practice of the masters!

Naturally every developing player has to study these examples, as he will face similar positions and problems in his practice. The more a player knows of these positions, the more frequently he will be able to apply the necessary ideas in the correct way. Of course, there are many basic positions in endgames and precise variations in the openings, which have to be remembered by heart. But the greatest part of endgame and middlegame play consists of knowledge of typical plans and typical tactical motifs, which can be used for different purposes. To help you attack the opponent’s king or simply to help you implement plans faster and more effectively. Every young player has to study them and that is possible just from the games of the great players. Vladimir Kramnik once said that at the moment when he decided to fight for the World Championship, he spent one year just analysing all the matches of the WCh. In general, we have to study the classics in two ways: 1) As we explained, in the books on the endgame and the middlegame. Different important subjects are studied from the selected games of the greats. 2) Every top player had his or her own speciality. Like Rubinstein was the greatest master of the ‘exchange technique’, Botvinnik was master of ‘centralisation’ and Alekhine was the greatest player in developing an opening initiative. For each of them there are extraordinarily instructive examples in which they employed their own favourite methods. Another problem exists – in the chess world we don’t have many good books on the middlegame and for this reason young players have problems knowing how to study the classics. Different tactical methods do exist and for these subjects we have plenty of good literature. We will present a few examples showing how the same tactical methods were developed by the top players and how more complicated it became over the years. The same situation is true of the development of typical plans in classical structures.