Accueil / JEU D'ECHECS/Livres d'échecs/Nouveautés/Odessky - Winning Quickly with 1.b3 and 1...b6
Nouveau 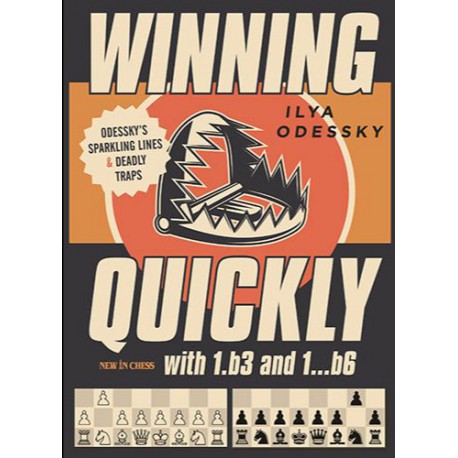 Odessky - Winning Quickly with 1.b3 and 1...b6: Odessky’s Sparkling Lines and Deadly Traps. Livre en anglais sur les ouvertures au jeu d'échecs. “I left chess in 2012. I did not touch it for several years.

Odessky - Winning Quickly with 1.b3 and 1...b6: Odessky’s Sparkling Lines and Deadly Traps. Livre en anglais sur les ouvertures au jeu d'échecs. “I left chess in 2012. I did not touch it for several years. Then I decided to test my strength in Internet blitz. I started from scratch. The board floated before my eyes, and my knee twitched. Less than two months later, I crossed the grandmaster rating mark. My opponents, among them lots of players with a big name, played chess better than me. Surprisingly though, I knew more. On a small island of chess theory, onto which I lured them, I was better equipped. Much better! About 30% of the games ended in wins around the 20th move. A quarter of the games simply ended in mate. In all games, I opened with the moves 1.b3 and 1…b6.”
International Master Ilya Odessky is the world’s leading expert on the 1.b3 and 1…b6 chess opening systems. Despite their apparent calm, these openings can get extremely sharp. Now Odessky presents his findings and achievements of recent years. His baffling traps will help you crush your opponents in the opening, with both White and Black.
Odessky admits that some of his lines may objectively be somewhat dubious. But in blitz and rapid games they will lead to spectacular play and many surprising wins. Ilya Odessky will entertain, amuse and surprise you in this highly unusual chess opening book full of ultra-romantic chess.
Ilya Odessky is an International Master from Russia, a well-known chess coach and a prolific author.
Praise for Ilya Odessky’s Play 1.b3: The Nimzo-Larsen Attack, a Friend for Life (2008):
"Odessky is not just a creative writer but also an excellent chess instructor who combines crystal-clear prose with elegant objectivity." -- Arne Moll, ChessVibes
"As entertaining and original an opening book as we have seen in years." -- British Chess Magazine
"A book that is worth more than just the variations outlined in it." -- Bill McGeary, ChessVille