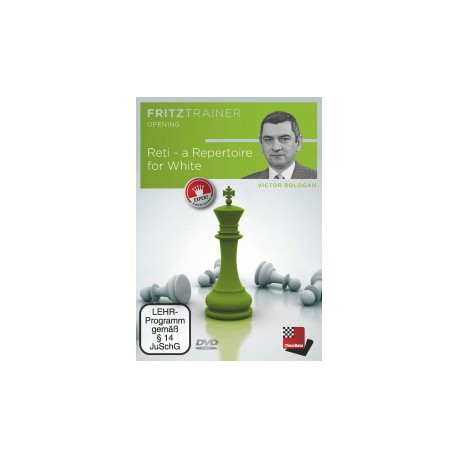 DVD Bologan: Reti - a Repertoire for White. It is always fascinating when you, preparing for the game or checking an opening line, meet games dated from the beginning ...

DVD Bologan: Reti - a Repertoire for White. It is always fascinating when you, preparing for the game or checking an opening line, meet games dated from the beginning of the last century or even from the 1800s. Working on the DVD, I realized that the development of the knight to f3, followed by the attack on the centre with c4, was played by almost all great champions of the
past. The most valuable investment into this opening was of course made by Richard Reti, who scored a couple of victories with it in the 1920s, but what would it look like without Capablanca's games or Smyslov's fine ideas? Nowadays the main protagonist of 1.Nf3 with White is Vladimir Kramnik, who has in my opinion the deepest strategical knowledge and understanding in chess. Especially the Reti is designed for those players who like strategy, manoeuvres and plans. Who like to avoid opening tons of theory, the jungle of forced lines. In this DVD, I tried to deal with all possible Black reactions against 1.Nf3. Naturally, there is much theory left outside of it, but a repertoire for White for sure is inside. Enjoy!
o Video running time: 5 hours (English)
o With interactive training including video feedback
o Extra: Analysis by Bologan plus more than 50 model games
o Including CB 12 Reader

Victor Bologan is a pupil of the top Moldovan trainer Vecheslav Chebanenko. For many years Bologan has been the number one in Moldova and has represented his country in ten Chess Olympiads. He has won over 50 international events. His greatest successes were in 2003, when he first won the Aeroflot Open and then the famous Dortmund Tournament, ahead of Kramnik and Anand. Bologan has extensive experience as a trainer and has also published five chess books and 22 ChessBase DVDs.