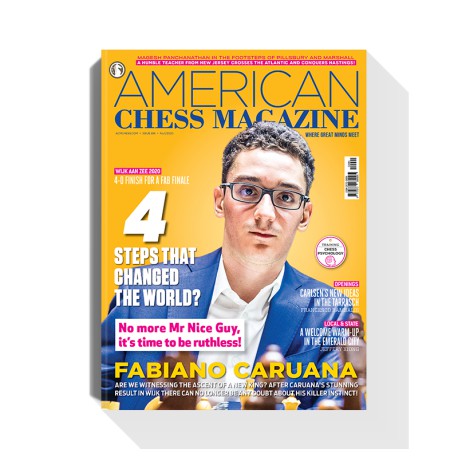 Are we witnessing the ascent of a new king? After Caruana's stunning 4-0 in Wijk there can no longer be any doubt about his killer instinct! The greatest champions are also the most ruthless...

ENJOY FREE US SHIPPING!
America’s No.1 player took total command in Wijk aan Zee, the first super-tournament of 2020, with an awesome score of 10/13. Unleashing a stunning 4-0 finish, he outstripped world champion Magnus Carlsen by a two point margin! However, it was not only his dominating performance that raised eyebrows but the Herculean effort he made in the last four rounds.
His final game will be remembered for a long time to come, even though it had absolutely no bearing on the final standings. Caruana was already a point and a half ahead of the field and winner of the tournament with a round to spare. But he still played for a win! All in all, it was a 4-0 Finish For a Fab Finale! These “4 steps that changed the world” have considerably raised expectations for Caruana’s world title chances and in ACM #16 each one of these encounters is annotated in detail.
Yes, 2020 is World Championship year. But first Caruana needs to navigate his way through the Candidates Tournament, just like he did two years ago. And from the many messages of enthusiastic support for Fabi, published in our “Readers Voices” section, one name repeatedly crops up as a very real obstacle on his path to a second world title match: “Go Fabiano, but watch out for Ding Liren!” writes one chess fan. In their 2018 showdown, Fabiano and Magnus were equal Brothers in Arms (see ACM #09) in classical play, but now the American seems to have moved up a gear to display an uncompromising Fischer-like thirst for blood!
Incidentally, we also cover additional Wijk aan Zee games by Caruana and Carlsen, as well as the play of two more US representatives. Wesley So made a powerful return to the higher echelons by finishing a clear 3rd, while Jeffery Xiong gained invaluable experience in what was his first elite tournament. A wider perspective of Wijk aan Zee is presented by GM Alex Mista and GM John Burke.

In the Footsteps of Pillsbury and Marshall
And that’s not all. There is another American success story! Have you heard about the humble teacher from New Jersey who crossed the Atlantic and won the famous Hastings tournament? GM Magesh Panchanathan hasn’t been too active across the board over the past ten years, and naturally(!) journeyed overseas with the idea of a New Year family vacation. Yet ultimately he canceled and rescheduled his flight back home! Why on earth would someone do that at the very last moment? :) Well, it’s not often a US player finds their name engraved on the same trophy as fellow Americans Harry Nelson Pillsbury (conqueror of Hastings 1895) or Frank James Marshall (winner in 1928)! Now this latest winner of the Hastings Masters provides ACM with an exclusive account of his remarkable achievement, together with a selection of annotated games and positions from the tournament.

Training: Chess Psychology
How important is the psychological aspect when playing chess? To answer this question we wanted to hear what practical advice the professionals could give about handling key moments where psychological elements play a significant role. Our guest experts even responded a number of chess myths(!) that had cropped up in conversations with chess players.
Openings, Reports...
Young American GM Jeffery Xiong shares a nice personal story from Seattle, where he warmed up for Wijk by competing in an open tournament. From this event he even annotates a defeat he suffered against his former coach, who then went on to win the event!

As usual, the very end of 2019 was reserved for the Pan-Am Intercollegiate and World Rapid and Blitz Championships. A first-hand report from the former event – arguably the strongest in history – is presented by GM Alex Ipatov, whose own team managed to qualify for the ‘Final Four’ playoff to be staged in New York in April 2020. As a nostalgic curiosity we also reproduce an article taken from the first American Chess Magazine showing what U.S. collegiate chess looked like in 1897!
GM Francesco Rambaldi makes his debut in ACM by exploring a particular opening choice of Magnus Carlsen and his team – the Tarrasch Defence to the Queen’s Gambit – which is ideally suited to faster time controls and offers fresh ideas for Black. After all, to a certain extent it did help Carlsen to win both 2019 World Rapid…and Blitz!
Then, in his unique narrative style, IM Boroljub Zlatanovic showcases a selection of instructive games to illustrate a very powerful chess theme – the initiative. GM Alex Fishbein follows with an exceptionally educational piece on Death-defying techniques in the endgame, while his title-colleague Jacob Aagaard offers a set of puzzles from practical play for solving. Furthermore we add a selection of mate-in-two problems. In his regular column in ACM, GM Joel Benjamin pays tribute to legends of U.S. chess with whom he was personally acquainted and who have sadly left us over the past few years. Other tributes also appear to commemorate the characters and contributions of the late Bob Long and Dale Brandreth, two great names in the world of Amercan chess publishing. As usual there are tournament reports, book reviews by FM Carsten Hansen and an article by Jon Edwards on new developments in chess technology.