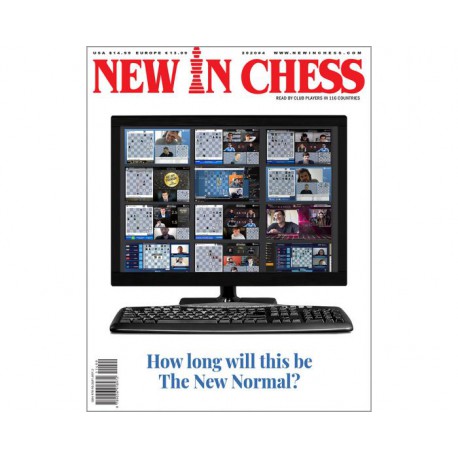 6 Back in business
As soon as the lockdown restrictions were eased, the chess players returned to the New York parks.

8 NIC’s Café
Hikaru Nakamura made a cameo appearance in Showtime’s ‘Billions’, and disposed of one of his opponents with a flashy mate-in-four.

14 Working from home
As professional tournaments have been cancelled or postponed, all activity has moved online. Magnus Carlsen keeps winning, and expanding his business conglomerate.

20 Magnus Invitational
Taking the initiative, the World Champion himself gave a fresh impulse to the battered chess circuit. The party he threw boasted a $250,000 prize-fund, including a $70,000 first prize.

40 When the truth is different
He loves old books, but as he returned to a game against Jan Timman in 1989, Nigel Short wondered how often these ‘original sources’ are misleading or plain wrong.

48 Perfume for Klara Shagenovna
In 1984 New In Chess sent off Alexander Münninghoff to Baku to interview young Gari Kasparov. Years later, Münninghoff, who sadly died on April 28, wrote a wonderful account of that trip.

56 Nations Cup
Hot on the heels of the Magnus Carlsen Invitational, FIDE and Chess.com organized the Nations Cup. Jan Timman saw China win thanks to the draw odds they had in the ‘super-final’ against team USA.

75 What would you play?
Test your decision-making skills with Thomas ‘Toolbox’ Willemze.

80 See you later, Alireza?
Maxim Dlugy examines why Alireza Firouzja is such a tough opponent for Magnus Carlsen in speed chess.

97 They are The Champions
Alexandra Samaganova is the national women’s champion of Kyrgyzstan.

98 Just Checking
What would people be surprised to know about Johan-Sebastian Christiansen?