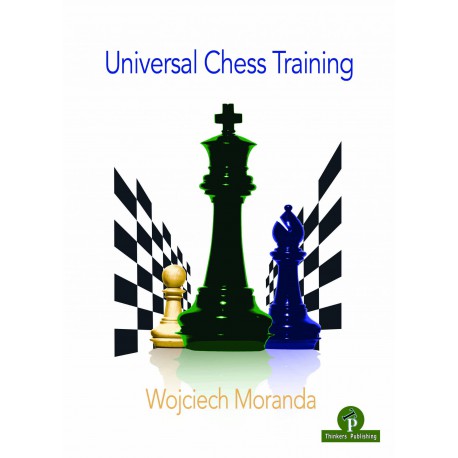 Moranda - Universal Chess Training. Livre en anglais sur l'entrainement au jeu d'échecs. Are you struggling with your chess development? While dedicating hours and hours on improving your craft, your rating simply does not want to move upwards?

Moranda - Universal Chess Training. Livre en anglais sur l'entrainement au jeu d'échecs. Are you struggling with your chess development? While dedicating hours and hours on improving your craft, your rating simply does not want to move upwards? Spending loads of money on chess books and DVDs, but feeling no real improvement at all? No worries – the book that you are holding in your hands might  represent a game changer!
Years of coaching experience as well as independent research has allowed the author to identify the key skills that will enhance the progress of just about any player rated between 1600 and 2500. Becoming a strong chess thinker is namely not only reserved exclusively for elite players, but actually constitutes the cornerstone of chess training, being no less important than memorising opening theory, acquiring middlegame knowledge or practising endgames.
By studying this book, you will:
– learn how to universally deal with any position you might encounter in your games, even if you happen to see it for the first time in your life,
– have the opportunity to solve 90 unique, hand-picked puzzles, extensively annotated and peculiarly organised for the Readers’ optimal learning effect,
– gain access to more than 300 pages of original grandmaster thoughts and advice, leaving you awestruck and hungry for more afterwards!
Wojciech Moranda (1988), Grandmaster since 2009, rated FIDE >2600 in standard/rapid/blitz. Poland’s TOP 7 player (February 2020) and FIDE TOP 100 in Rapid (2018). Member of top teams from the German (Schachfreunde Berlin), Belgian (Cercle d’Échecs Fontainois) and Swedish (Visby Schackklubb) league. Captain of the third best Polish team (Wieża Pęgów) as well as the PRO Chess League team, The New York Marshalls.
Professional chess coach, running his own chess school ‘Grandmaster Academy’ seated in Wroclaw (Poland), while training students worldwide, from California to Sydney. His other notable coaching experiences include i.a. working with the National Youth Chess Academy of the Polish Chess Federation (since 2012) and the Polish National Female Chess Team (2013). In his work as a trainer, Wojciech puts special emphasis on improving his students’ thought-process and flawless opening preparation.