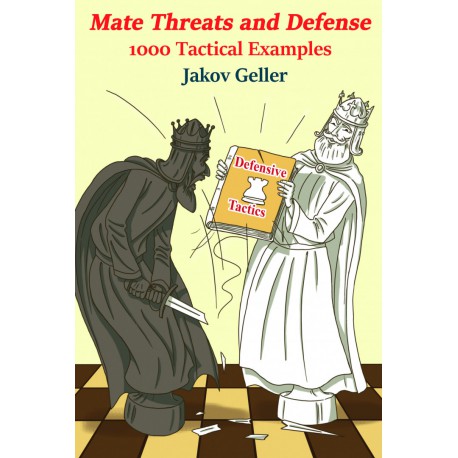 Livre 1000 Tactical Examples. This tactics book by FIDE Senior Trainer Grandmaster Jakov Geller teaches the reader how to create mate threats and execute them using a mixture of combination techniques.

Mate Threats and Defense by Jakov Geller. This tactics book by FIDE Senior Trainer Grandmaster Jakov Geller teaches the reader how to create mate threats and execute them using a mixture of combination techniques, as well as how to deploy all key defensive techniques to combat mate threats. Unlike most tactics books, the text provides readers with a detailed explanation of all elements of a mating combination, both individually and when combined with others. This knowledge enables the reader to identify tactical opportunities in their game and execute them or defend against them with confidence.

This book contains 1,000 carefully selected examples, of which 924 are exercises for the reader to solve. They begin with simple one-move illustrations of the concepts and then go on to more complex tests, with many featuring combinations of 5-6 moves and sometimes more. The book is split into 28 chapters, the majority of which focus on defending against mate threats. Nine defensive techniques are given their own chapters.

With every new defensive technique studied, the combinations in subsequent chapters become increasingly diverse. The difficulty level of exercises in each chapter hence gradually increases. This work is a direct sequel to the book 1500 Forced Mates published by the author with Elk and Ruby in 2021 and is intended for a wide audience of chess improvers.