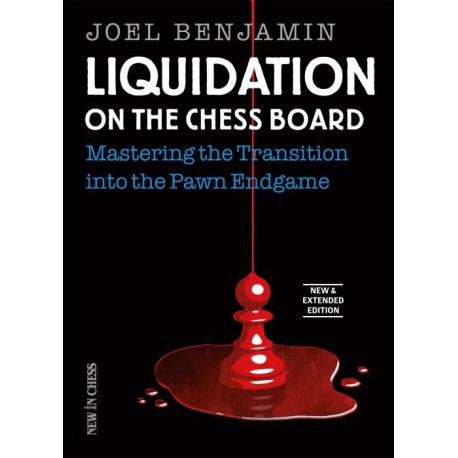 Benjamin - Liquidation on the Chess Board New and Extended Edition. Livre en anglais sur la stratégie au jeu d'échecs. Winner of the 2015 Best Book Award of the Chess Journalists of America (CJA)
Shortlisted for the English Chess Federation 2015 Book of the Year Award.

Benjamin - Liquidation on the Chess Board New and Extended Edition. Livre en anglais sur la stratégie au jeu d'échecs. Winner of the 2015 Best Book Award of the Chess Journalists of America (CJA)
Shortlisted for the English Chess Federation 2015 Book of the Year Award
THIRD, EXTENDED EDITION
Pawn endings do not arise out of nowhere. Before emerging as endgames with just kings and pawns, they 'pre-existed' in positions that still contained any number of pieces.
Liquidation is the purposeful transition into a pawn ending. It is a vital technique that is seldom taught. Strange, because knowing when and how to liquidate can help you win games or save draws.
In this book, former US Chess Champion Joel Benjamin teaches you all you need to know about successfully liquidating into pawn endgames.
He focuses on the practical aspects: what to aim for and how to get there. When to start trading pieces and how to recognize favorable and unfavorable liquidations.
Enter a fascinating world of tempo play (triangulation, zugzwang and opposition), breakthroughs, king activity, passed pawn dynamics, sacrifices and counter-sacrifices.
Exercises will test your growing skills.
This is a ground-breaking, entertaining and instructive guide.
This New and Extended 3rd edition presents 50 new examples, besides other additions and corrections.
At thirteen years of age Joel Benjamin broke Bobby Fischer's record as the youngest ever US master, and this was followed by countless tournament successes. He won the US Championship three times and was the chess consultant for IBM's Deep Blue computer, which made history by beating World Champion Garry Kasparov in an epic encounter.
IM Frank Zeller, Magazine Schach:
"Benjamin has managed to create an excellent guide to a difficult theme that has been badly served in chess literature (..) If you are really serious about improving your chess, you should work on your Benjamin!"
Sean Marsh, CHESS Magazine (UK):
"Entertainment is never far away (..) The material, which feels very fresh, provides an impressive series of easily digestible lessons."
Schach Magazin 64:
"Strongly recommended (..) In transitions into pawn endgames a lot can be gained and a lot can be lost."
GM Daniel King, creator of the Power Play DVD series:
'Well written and thoroughly researched. The selected examples have a strong practical value (..) This is an instructive work for players at any level above beginner - but it's not a dry endgame manual. The games contain some beautiful ideas and overall I found the book very entertaining.'
GM Matthew Sadler, former British Champion:
"The book works quite addictively (..) It's dealing with one of the big moments of uncertainty in practical chess."
IM Gary Lane, Chess Moves Magazine:
"A labour of love that has produced an outstanding book."
The Judges of the ECF Book of the Year Award:
"An attractive and entertaining book."
GM Daniel Naroditsky, Chess Life Magazine (US):
"Benjamin tackles one of the most important (and underappreciated) aspects of endgame practice."
GM Karsten Müller, author of 'Fundamental Chess Endings':
"An excellent new book. The theme of the right exchange is underrepresented in chess literature and Joel Benjamin manages to highlight its importance by investigating the transition into a pawn endgame in deep detail."
Uwe Bekemann, German Correspondence Chess Federation:
"Engages itself with a theme on which there is not a lot of literautre (..) It will doubtlessly enrich players with a new aspect of the art of playing chess."
Harry Schaack, KARL Magazine:
"Very instructive are not only the many exercises at the end of of each chapter, but in particular the last chapter where
0;Benjamin once more summarizes every important motiv in pawn endings, with examples and explications."
Richard Vedder, Schakers.Info:
"Not much has been written about liquidation into the pawn endgame, an important motiv. In endgame books it is often only indirectly touched upon. This book is therefore to be recommended."
GM David Smerdon, Chess.com:
"The book is anything but dry (..) Benjamin is excellent at explaining not only the intricacies of specific positions, but also useful practical guidance for general endgame play (..) I felt that I gained a lot from these instructions."
Eddy Sibbing, Max Euwe Centre Amsterdam:
"A must for every advanced chess player who wants to improve his liquidating skills."
Chris Wainscott, ChessIQ:
"I am not aware of any prior book which covered this subject, other than perhaps in passing. It takes only a moments thought to realize that all king and pawn endings started out as endings with more pieces on the board, and therefore this is a subject worthy of it’s own manual (..) I feel that GM Benjamin really hit the mark with this book."
Dennis Calder, FIDE Instructor:
"I have, untill now, never seen a collection of exercises on the theme of transition into the endgame, let alone with such precise solutions as Benjamin presents here."