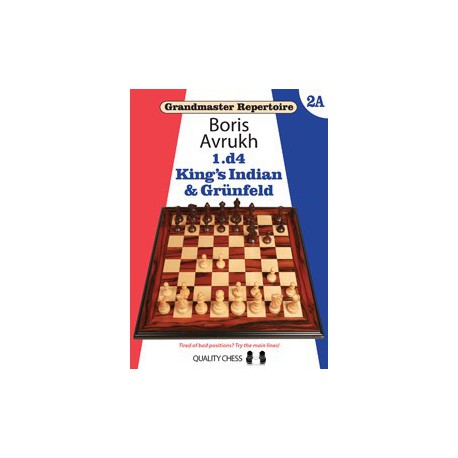 Avrukh - Grandmaster Repertoire 2A – King’s Indian & Grünfeld (Hard cover). Livre couverture dure en anglais sur les ouvertures au jeu d'échecs. When Boris Avrukh released his 1.d4 repertoire books in 2008 and 2010, they caused a sensation. GM Michael Adams remarked that “The high-quality Grandmaster Repertoire series has taken this format to a completely different level.”
Volume 2A is the third out of four brand new volumes in which Avrukh revamps, expands and generally improves upon his previous work in every way possible. This book provides a world-class repertoire against the Grünfeld and King’s Indian, two of Black’s most popular and dynamic defences. The author remains faithful to his preferred Fianchetto System, but has completely re-analysed it to forge an even more effective repertoire weapon than before.
Boris Avrukh is a grandmaster from Israel. He is an Olympiad gold medallist, former World Junior Champion and analysis partner of World Championship finalists.