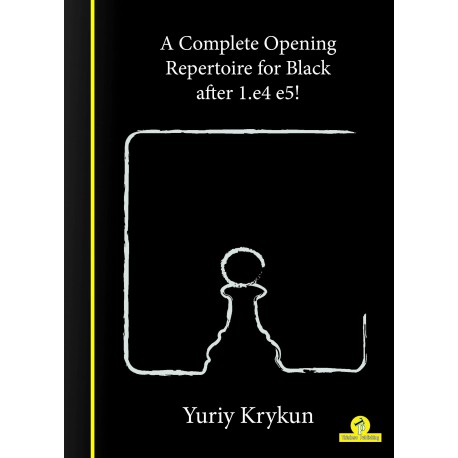 Yuriy Krykun - A Complete Repertoire for Black after 1.e4-e5!

Yuriy Krykun - A Complete Repertoire for Black after 1.e4-e5!

"One of the important issues players face – both relatively inexperienced ones at the beginning of their career as well as seasoned ones as they realize their chess craves change – is choosing an opening repertoire.

As a player and a coach, I have seen many approaches to this question, both remarkable and mistaken. Some players believe that the opening is something to ignore, that everything is decided in the middlegame. Others think that studying opening traps is what wins games.

Some tend to follow their favourite world-class player's recommendations, while others like to sidestep well-known opening theory early on, preferring unpopular side-lines.

To me, opening choice is about all those decisions. I think that many openings are good; there are some dubious ones, but they can also yield formidable results overall or in specific situations if chosen and handled carefully.

I firmly believe that your opening repertoire should mostly be based on your playing style and other personal traits, such as memory and work ethic. It is important to evaluate yourself as well as your strengths and weaknesses properly in order to be able to build the right repertoire that would not only suit you well, but also improve your overall chess.

The little detail, though, is in the word “mostly”. Namely, I firmly believe that there are a few classical, rock-solid openings with an impeccable reputation, such as 1.e4 e5 as a response to 1.e4 or the Queen's Gambit and Nimzo as an answer to 1.d4 that players of all styles and standards should try, no matter what their style is. This will enable players to learn, appreciate and practice some of the key chess values, such as the importance of space, lack of weaknesses, bad pieces, and comfortable development and so on – you name it.

I, myself, started out as a keen Sicilian player. Just like all youngsters, I cheerfully enjoyed complications, tactical massacres and everything else that the Sicilian is all about.

However, as I was developing as a player, my style was changing also. Eventually, I realized I was much more successful with positional play, so it was time to change the outfit – and 1.e4 e5 suited me well.

I have used this move as a response to 1.e4 nearly exclusively in recent years, both versus weaker and stronger opposition, with fantastic results. If only other openings would grant me such results as well!

I have not only studied these variations myself but have also shown them to numerous private students. To be frank, we have almost always concentrated on White's most dangerous possibilities, such as the Ruy Lopez, Italian and Scotch. Occasionally, we have also analysed the side-lines – either as a part of preparation for specific opponents or to make sure my students become more universal players and gain more all-round knowledge.

Eventually, I realized that the knowledge I gained from 1.e4 e5 can and should be shared with more players, and this is how my book came to life. Of course, the readers will differ, so there is a no “one-size-fits-all” solution. But, I have carefully and diligently tried to achieve the same goal I used when working with my students: to keep my recommendations both theoretically sound as well as practical and accessible.

I expect not only titled players but club players and the less experienced readers to equally benefit from this book. So, sometimes you will find razor-sharp novelties, but in many cases, we will rely on positional understanding, typical structures and standard ideas. I believe the opening is not all about memorization, so I have taken a different approach from many authors by keeping the balance between recommending objectively good variations as well as making sure an adequate amount of work will suffice to get you started. You won't need to spend years studying the material, fearing there is still much more to learn.

1.e4 e5 is not just an opening. It is repertoire that represents our game as a whole. It is something players of all styles will enjoy due to the countless possibilities 1...e5 provides. Hopefully, learning 1...e5 will also make you a better player. And, finally, I hope the book you are now holding in your hands will not only give you joy but illustrate a passion for chess with the variations presented in this work."