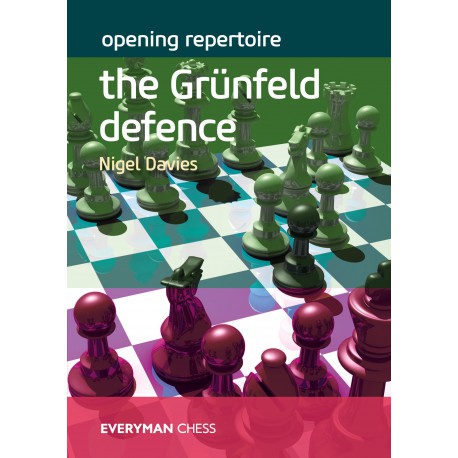 The Grünfeld Defence is is a combative reply to 1 d4 which has been favoured by many world champions including those two legends of the game, Bobby Fischer and Garry Kasparov. It is an opening in the hypermodern style, in that Black generally allows White to build a strong centre early on in the expectation of being able to undermine it in the middlegame play. Opening Repetoire: The Grünfeld Defence book cuts through the dense theory that surrounds this opening and establishes a straightforward repertoire is based around consistent strategies and concepts. It has all the information necessary to enable the reader to begin playing the Grünfeld with confidence. There are also “Grünfeld-type” suggestions to counter White systems based on the English and Réti openings.

In Opening Repertoire: The Grünfeld Defence, Nigel Davies guides the reader through the complexities of the Grünfeld and carves out a repertoire for Black. He examines all aspects of this highly complex opening and provides the reader with well-researched, fresh, and innovative analysis. Each annotated game has valuable lessons on how to play the opening and contains instructive commentary on typical middlegame plans.

• A complete repertoire for Black against 1 d4.

• A question and answer approach provides an excellent study method.

Nigel Davies is an International Grandmaster and respected coach. He is the author of numerous books and DVDs on the game and is known for the clarity of his explanations.