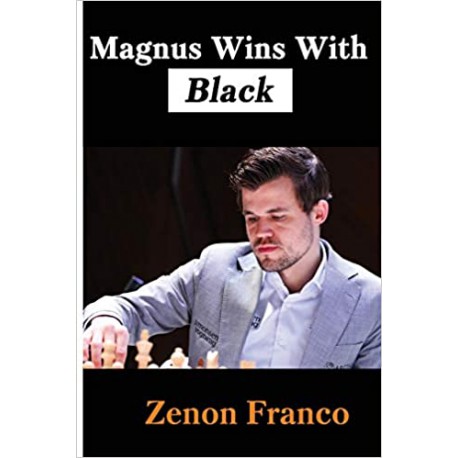 In Magnus Wins With Black Grandmaster Zenon Franco deeply analyses 30 of Magnus Carlsen’s most instructive games where he wins with the black pieces. This book is written in “move by move” style, a good training tool containing exercises and tests. This format is a great platform for studying chess, improving both skills and knowledge, as the reader is continually challenged to find the best moves and the author provides answers to probing questions throughout. It is the second of two volumes written by Franco for Elk and Ruby Publishing House on the games of Magnus Carlsen. His first volume Magnus Wins With White has proved to be an international best seller.

The main difference between these games and those in the previous book is that fewer of them are attacking games than when Carlsen plays White. This should not come as a surprise, because White has more chances to dictate the game scenario. Nevertheless, there are still some examples in this volume where Carlsen wins by attack. Another important difference is that there are more endings in this volume, which is also understandable.

What remains unchanged is that the fights are always intense. Carlsen never stops trying to win the game, no matter if, objectively, his chances are small. There are several examples where, at some point, his opponents collapse, unable to withstand the tension that Carlsen maintains in the game.

Most of the games are taken from Magnus’s recent career, including one from 2020 and six from 2019. His opponents are nearly all super-grandmasters, and they include former world champions Viswanathan Anand and Vladimir Kramnik, as well as Fabiano Caruana, Maxime Vachier-Lagrave, Alexei Shirov, Levon Aronian, Ding Liren, Ian Nepomniachtchi, and Anish Giri.