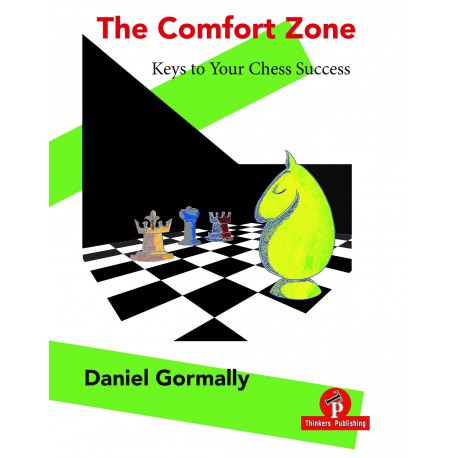 Gormally Daniel - The Comfort Zone : Keys to Your Chess Success

Gormally Daniel - The Comfort Zone : Keys to Your Chess Success

"I hate introductions so I’ll keep this short. (A bit like the good moments in my chess career.) The inspiration for this book came from a golf tournament on the PGA tour I was watching recently. They’ll be plenty of golf and sportinganalogies in this book, so if these annoy you, then probably you should try another book. (Tough cookies if you’ve already bought.) Jason Kokrak won it, his first PGA tour event.

He’s a solid professional player, but nothing special. Thirty-five years of age. Obviously, I had my usual losing bets on people like Matthew Fitzpatrick and Tommy Fleetwood. Neither of those have ever won on the PGA tour, despite having much higher world rankings than Kokrak. So how was Kokrak able to break through, and they still haven’t? It’s true that Kokrak has plenty more PGA tour events under his belt than the other two. But given that Fleets and Fitzy have several European tours wins to their name (admittedly a slightly weaker tour) then you might have expected them to have broken through by now.

You could suggest that they might have choked in some of the near misses they have had, and you might well be right. Fleetwood came very close at the Honda classic this year, before he struck his second shot on 18th into the water. A birdie there would have got him into a play-off , an eagle would have got him the outright win. But perhaps the biggest reason why they hadn’t won yet is their level of comfort.

Simply put, these are two players who have grown up on European style layouts, on links courses. They just don’t have the total comfort zone of having grown up on American courses. To add to Kokrak’s comfort zone, he was also winning at a course where he was a member and had played many times. When Fleets and Fitzy play on the PGA tour, it’s an away game for them, whatever their skill level.

I’ve become increasingly convinced of this comfort zone theory to the degree where I’ve started to apply it to chess. To use the same logic, I believe a chess player is more comfortable in an opening that they have played since childhood. They’ll be less likely to make mistakes in that opening. You can also apply it to tournaments as well.

Ok, so when I talked about this introduction being short, I lied. Spoiler: I lie a lot. So should you, especially over the chess board. Lie about what move you are going to play to your opponent. Lie about how you are feeling. If you are in your comfort zone, then give the impression that you are not. Anyway, enough babbling. Let us get on with it."