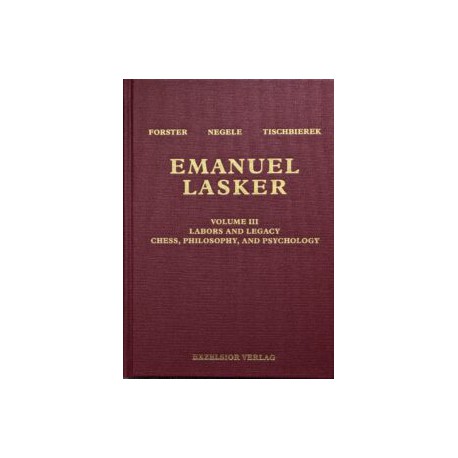 This final volume of the Lasker trilogy covers the later part of his life from 1914 onwards and his manifolds ambitions and writings in chess and science. The biographical compass by Richard Forster shows the ups and downs of the world champion during World War I, his loss of the world championship, the subsequent economic crisis in Germany, the raise of the Nazis, and Lasker’s escape, illustrated with dozens of private documents and letters.

This final volume of the Lasker trilogy covers the later part of his life from 1914 onwards and his manifolds ambitions and writings in chess and science. The biographical compass by Richard Forster shows the ups and downs of the world champion during World War I, his loss of the world championship, the subsequent economic crisis in Germany, the raise of the Nazis, and Lasker’s escape, illustrated with dozens of private documents and letters. Sergey Voronkov paints a detailed picture of Lasker’s fantastic tournament successes in Russia between 1896 and 1936 as well as the frightening circumstances of Lasker and his wife’s life in Soviet Russia in the mid-1930s. Jan Sprenger, Marco Baldauf, Ulrich Sieg, and Fernand Gobet share illuminating thoughts on Lasker’s endeavors as a (Jewish) intellectual in the post-war era, his scientific ambitions as a philosopher as well as his late unpublished work on psychology, which is discussed here for the first time ever.

Egbert Meissenburg and Richard Forster follow with a meticulous overview of Lasker’s rich oeuvre as a writer on chess and other games, mathematics, philosophy, and much else, with translation into more than twenty languages. Herbert Bastian analyzes in detail Lasker’s impact as a chess writer and teacher, while Mihail Marin provides fresh insights into Lasker’s best games and spectacular success in his sixties, when in Moscow 1935 he still kept up with the world’s best.
Contents

A Biographical Compass, Part III, by Richard Forster
Lasker and Russia by Sergey Voronkov
Lasker, The Philosopher by Jan Sprenger & Marco Baldauf
Lasker and Judaism by Ulrich Sieg
The Psychology of Games by Fernand Gobet
Emanuel Lasker’s Chess Columns by Richard Forster
Bibliography of Lasker’s Writings by Egbert Meissenburg
Lasker as a Chess Teacher by Herbert Bastian
An Impressive Coda by Mihail Marin

Marco Baldauf, born 1990, works as a policy advisor in Berlin. From 2010 to 2019, he studied physics and philosophy in Munich and Berlin. He holds the grandmaster title in chess, authored several DVDs on chess strategy, and plays in the German Bundesliga for Schachfreunde Berlin.

Herbert Bastian, born 1952, is a retired teacher of mathematics and physics in Saarbrücken. He holds the International Master title and is a certified trainer of the German chess federation. From 2011 to 2017 he presided over the federation and from 2014 to 2018 he was a vice president of the world chess federation (F.I.D.E.). He is the author of a chess course (4 vols.) and numerous chess articles. In 2021, he co-organized the online conference on chess history in conjunction with the 100th anniversary of the French chess federation. After a painstaking study of the “Chapais manuscript,” he identified Gaspard Monge as the likely author and documented his findings in Geheimnisse des Schachmanuskripts von Chapais (2022).

Dr. Richard Forster, born 1975, lives in Winterthur. He is an international chess master with a doctorate in computational linguistics and works as a consultant in data engineering. He has authored several chess books, including Amos Burn (2004) and The Zurich Chess Club (2009/2011). He was one of the editors of Emanuel Lasker—Denker, Weltenbürger, Schachweltmeister (2009) and is the technical editor of the present series. He has represented Switzerland in six Chess Olympiads.

Dr. Fernand Gobet, born 1962, is Professorial Research Fellow in the Centre for Philosophy of Natural and Social Science at the London School of Economics. His main research interests are the psychology of expertise, the acquisition of language, computational modeling, and scientific discovery. He is the main architect behind the CHREST project (Chunk Hierarchy and REtrieval STructures), a cognitive architecture based on the idea of chunking. He has authored and co-authored over 300 publications, including ten books. His latest books are Understanding Expertise: A Multi-disciplinary Approach (2015) and The Psychology of Chess (2018). He is an international chess master and represented Switzerland in three Chess Olympiads.

Mihail Marin, born 1965, is a chess grandmaster living in Bucharest. He is a three-time champion of Romania and has represented his country in a dozen Chess Olympiads. He has made himself a name as an author of well-received opening books as well as numerous treatises on games of past, including Secrets of Chess Defence (2003), Learn from the Legends (2004; 3rd ed. 2015), Secrets of Attacking Chess (2005), Old Wine in New Bottles (2019), Learn from Bent Larsen (2022), and Vladimir Simagin (2022).

Egbert Meissenburg, born 1937, a retired attorney and notary public, is a chess researcher in Seevetal. For nearly sixty years, since 1962, he has been engaged as an author, editor, and publisher of chess history and chess bibliography. Numbers 17 and 19 of his series “Schach-Forschungen” (Chess Research) were Emanuel Lasker als Philosoph and Emanuel Lasker: Zur Würdigung eines Schach-Weltmeisters (both 2000).

Dr. Ulrich Sieg, born 1960, is Professor of Modern History at Marburg University. His publications include Jüdische Intellektuelle im Ersten Weltkrieg (2001), Deutschlands Prophet (2007, English translation 2013), Die Macht des Willens (2019), and, most recently, Vom Ressentiment zum Fanatismus (2022), a study of modern anti-Semitism. With Michael Dreyer he edited Emanuel Lasker—Schach, Philosophie, Wissenschaft (2001). He has played chess for the Lübecker Schachverein since 1972 and is a F.I.D.E. master.

Dr. Jan Sprenger, born 1982, is Professor of Logic and Philosophy of Science at the University of Turin in Italy. He studied mathematics and philosophy in Bonn and gained his PhD in philosophy in 2008. He recently published the research monograph Bayesian Philosophy of Science (with Stephan Hartmann, 2019). Currently, he conducts a project on scientific objectivity. He holds the grandmaster title in chess, is a prize-winning composer of endgame studies, and regularly contributes tournament reports and general chess-related essays to the German magazine Schach.

Sergey Voronkov, born 1954, lives in Moscow. Chess historian, journalist, and writer. Over 100 publications on the history of chess in Russia, including ten books, notably David Janowski (1987, with Dmitry Plisetsky), David protiv Goliath (2002, with David Bronstein; in English as Secret Notes, 2007), Russians protiv Fischera (2004, with Dmitry Plisetsky; English editions 1994 and 2005; Italian edition 2003), Fyodor Bogatyrchuk: Doctor Zhivago sovetskikh shakhmat (2013, two volumes), Shedevry i dramy chempionatov SSSR (2007, 2019: a three-volume series on the masterpieces and dramas of the Soviet championships; English translations of volume I and II in 2020 and 2021), and Russky Sphinx (2021, a biography of Alexander Alekhine).