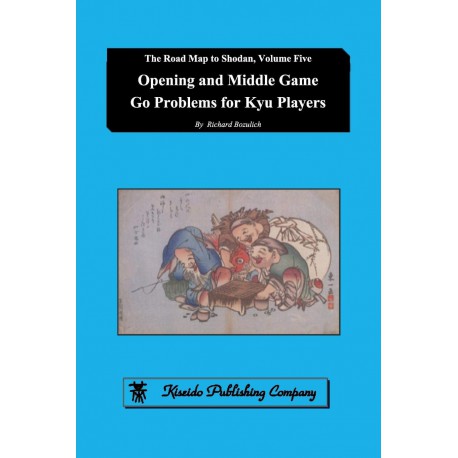 Opening and Middle Game Go Problems for Kyu Players presents 200 problems of positions that regularly arise in the opening and middle game. It is intended to supplement the Graded Problems for Beginners and Graded Problems for Dan Players series. Whereas the books in those two series are mainly about life and death, this book consists mainly of whole-board positions that regularly arise in the opening and middle game. Some of the topics covered are fighting inside spheres of influence, neutralizing thick positions, using thick positions to attack and make territory, the direction in which to attack and the direction in which to build walls, invading thin positions, defending and attacking weak groups, and matching the joseki to the overall position. Numerous examples of some of the most important go proverbs are given, such as ‘Play hane at the head of two stones,’ ‘When caught in a crosscut, extend,’ and ‘Capture the cutting stone.’ The initial problems in the book are in the 15- to 20-kyu range, but they gradually become harder in the latter part of the book reaching the level of 1-kyu by the end of the book.

As a bonus, an exhaustive exposition of the early 3–3-point invasion josekis is presented in an appendix. These josekis have come to dominant the openings in professional and amateur go since they were played by the artificial intelligence program known as AlphaGo. These josekis should be studied by every ambitious kyu player who hopes to rise to dan level.