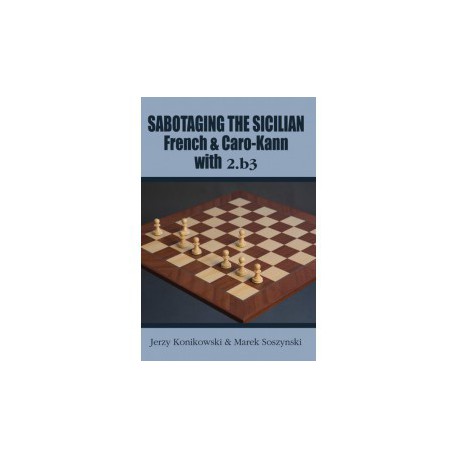 Konikowski - Sabotaging the Sicilian, French and Caro-Kann with 2.b3

Konikowski - Sabotaging the Sicilian, French and Caro-Kann with 2.b3

Konikowski - Sabotaging the Sicilian, French and Caro-Kann with 2.b3. Livre en anglais sur les ouvertures au jeu d'échecs.
In the first full book to examine 2.b3 ...

Konikowski - Sabotaging the Sicilian, French and Caro-Kann with 2.b3. Livre en anglais sur les ouvertures au jeu d'échecs.
In the first full book to examine 2.b3 against the Sicilian, French and Caro-Kann, mainlines, interesting sidelines and current theory are reviewed. In addition, what actually happens in modern practice is surveyed.
The authors are optimistic for White, and concentrate on the best continuations while trying to be objective. It is in that spirit that they conclude that 2.b3 is sound against the Sicilian, fun against the French, and curious against the Caro-Kann. In all three cases, the objective is to sabotage Black's play, to take him out of his comfort zone. The word "sabotage" has historically derived from throwing a clog into machinery, or in other words, throwing a monkey wrench in the works; here the wrench is a queenside fianchetto.
White aims his light-square bishop toward the right flank; he typically delays Ng1-f3 so that he may play Qd1-f3 or advance his f-pawn, and use his light-square bishop to build a full-scale kingside attack. Queenside castling often occurs, hoping for a kingside pawn storm. Yet, despite all these characteristics of 2.b3, White may still retains the option of d2-d4 for a more conventional-looking 1.e4 opening.
With 2.b3, you will have one more arrow in your theoretical quiver to battle Black. And, like it or not, Black will be compelled to do deal with the queenside fianchetto factor.
Jerzy Konikowski is one of the most prolific chess authors in the world with dozens of publications in several languages to his credit. He holds the FIDE Master title as well as titles in correspondence chess and chess composition.
Marek Soszynski is a Master of Philosophy and co-author of the best-selling and widely acclaimed How to Think in Chess.