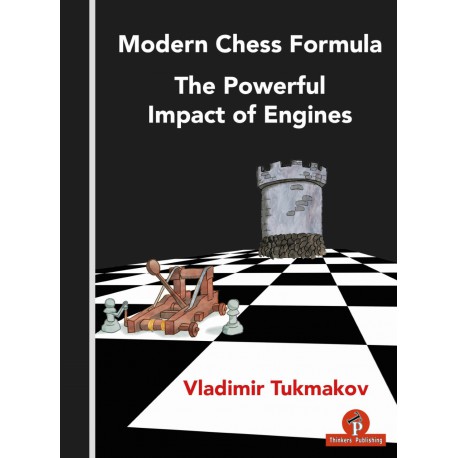 Tukmakov – Modern Chess Formula – The Powerful Impact of Engines. Livre en anglais sur la méthodologie de la pensée au jeu d'échecs. This book is dedicated to chess, though I must confess it is not that same chess with which I immediately and eternally fell in love many, many years ago.

Tukmakov – Modern Chess Formula – The Powerful Impact of Engines. Livre en anglais sur la méthodologie de la pensée au jeu d'échecs. This book is dedicated to chess, though I must confess it is not that same chess with which I immediately and eternally fell in love many, many years ago. There were plenty of wonderful moments, and no shortage of horrible disappointments associated with that version of the game in which I certainly considered myself a true professional. The realities of chess life during the second half of the twentieth century are diffi cult for today’s young people to imagine or understand: Tournaments lasting 30,40 days with adjourned games being completed on specific days allotted for such adjournments. Unbelievable time trouble given that back then only the unrestrained dreamer David Bronstein even thought about incremental time to be added after each move. Mountains of cigarette butts in ashtrays — a fixed attribute of the chess battles and battlefields in those severest of days. Finally, suitcases filled to the very brim with Yugoslav Chess Informants and handmade card indexes.
The arrival of computers dramatically changed the game, while the birth of “Chessbase” made all those aforementioned suitcases that much lighter. Still, in the early 80’s this new trend caught onwith but a select few even if the value of electronic databases was certainly evident. For instance, I only obtained my first laptop after working with Viktor Korchnoi in preparation for the 1991 candidates matches. Seeing how a sixty-year-old accomplished grandmaster used one finger to complete a task that required considerable energy from my entire body convinced me of the necessity to change. It took another ten years at that before the computer evolved from being a faithful archivist into an active participant in the process of tournament or match prep. Even during the Karpov-Anand match in 1998, the analysis of the very best chess engines caused much confusion and snickering.
As I am publishing this book in 2020 it is important to recall that back in 2004, during the Kramnik-Leko championship match, a famous episode involving weak computer analysis could still take place. Peter Leko had refuted, “Over the board,” the analysis of Vladimir Kramnik’s powerful seconds and coaches, all of whom were armed with the latest computer engines of the time. In truth, it wasn’t even the machine’s fault but rather the fact that it still happened to work too slowly. It’s difficult to explain the drama behind these situations to a young chess player today since the reliable computer now solves similar positions in mere seconds. Furthermore, the fateful question of who is stronger, man or machine, has long been answered. The engine has become the “Holy Cow” to which all chess players now pray regardless of their religious convictions or rating. Far from being a foe or rival it has become an invaluable helper, consultant and the highest of authorities. Since the highest of all oracles is soulless and cynical it is ready to help anyone ignoring opinions and preferences. Therefore, the task before each player is to use this dominant and universally accessible power to their particular advantage.
The rise of computers didn’t just alter the lives of professionals. The nature of the relationship between the players and general public changed completely. On the one hand the aura of exclusivity and exceptionalism that surrounded grandmasters in the past was gone. On the other hand there was a dramatic increase in the number of individuals that were suddenly able to follow along and understand top level games. There was no longer a need to count pieces anymore, (as some wives of chess players would often do since they did not know how to play themselves), or try to decode some kind of hidden body language. All one need know now is that a “+” in front of the number means White has an advantage while a “–“ thereby means Black has an advantage. The bigger these numbers are the more significant the advantage. It usually takes about ten minutes to teach a novice the rules of any game while understanding, and more so, the correct evaluation of what happens on the pitch, court or field is much harder to master. In modern chess everything is strictly backwards. It is possible to know the evaluation of any position better than any expert while not truly understanding a single thing at the same time.