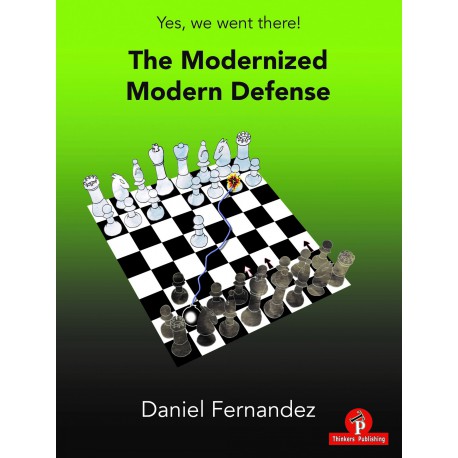 Daniel Fernandez – The Modernized Modern Defense. Livre en anglais sur la défense Moderne au jeu d'échecs. Playing the Modern Defense with any regularity is a sign that you truly love chess.  From the very first move, you are indicating to your opponent (and to the jury  deciding on the brilliancy prizes!) that you would like to play an unbalanced position.

Daniel Fernandez – The Modernized Modern Defense. Livre en anglais sur la défense Moderne au jeu d'échecs. Playing the Modern Defense with any regularity is a sign that you truly love chess.  From the very first move, you are indicating to your opponent (and to the jury  deciding on the brilliancy prizes!) that you would like to play an unbalanced position. Then the thrill of the fight courses through your veins and you simply must trust yourself to handle developments better than the other player. For a very long time this truly was the absolute frontier, the Wild West of opening theory: if it went well you looked like a genius, if it goes badly you got mated in 20 moves, and most likely neither of you ever really made the analysis which you so badly needed to remember at the board.
A certain air of reckless abandon, of pure devil-may-care mischief, was needed to  play it successfully, and to some extent still is. Something of this passion was conveyed into printed form by Swedish GM Tiger Hillarp Persson when he wrote his Tiger’s Modern. Even within the Modern, the crème de-la-crème of the opening, when I learned it from his book almost a decade ago was the famous Hippo setup, the epitome of the adventurer’s spirit.
While White goes about stationing his pieces aggressively, controls the centre, etc., Black nonchalantly places nearly all his pawns on the third rank and shuffles his pieces behind them! For some reason this appealed to the 15-year-old me: the idea that I could take the game to my opponent in a way that I chose, rather than by preparing endlessly for some subtlety on move 27 of the Poisoned Pawn Najdorf.
Throughout the year 2010 I played the Modern almost exclusively; it filled the gap between my 1…e5 phase and my 1…c6 phase. (The latter remained my main reply to 1.e4 until I began learning the Najdorf in 2018, but I do still enjoy regularly mixing it up with the Modern; there are more than 20 references to my own games in the text.) What might surprise you is that 2010 was the year in which my chess career started progressing by leaps and bounds! I became an IM relying very heavily on it; an example from one of my norm tournaments can be seen in Part I (Lahiri-Fernandez.) I embraced the complexity, the audacity and the novelty whole-heartedly, and it embraced me back.
Times are changing (as even the Wild West at some point became industrialized) and theory has developed on everything. It has therefore become possible, inter alia, to try and write a rigorous opening manual on the Modern. What I mean is not that equality has been found and this should be your exclusive opening choice for all time to come (I would be lying to you if I said that) but rather that there is now a roadmap as to how you should study this opening. About time, given the number of 1.e4 repertoires that have been written and which contain anti-Modern  recommendations (usually in the ‘Other’ or ‘Miscellaneous’ section towards the back!) that nobody has taken the time to combat rigorously.