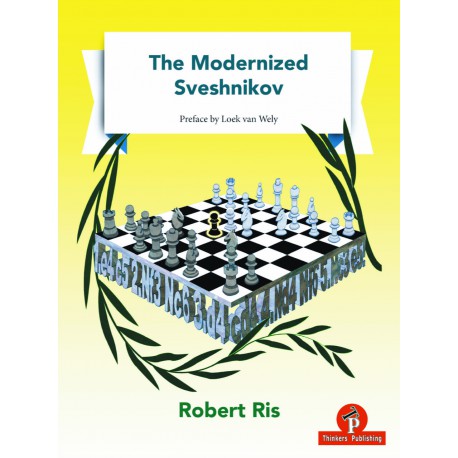 Ris - Modernized Sveshnikov. Livre en anglais sur une des ouvertures siciliennes les plus agressives au jeu d'échecs, la Sveshikov. The Sveshnikov is undeniably one of the most dynamic and aggressive Sicilians available these days.
Most recently, it was made popular again by World Champion Magnus Carlsen in his match against Fabiano Caruana at the end of 2018.
The main lines lead to complex positions, and a deep knowledge and understanding of the opening is a real necessity for any player who wishes to enter this battlefield.
Our author, Robert Ris, focuses on all the current developments, highlighting the most important and instructive games from recent years, using his own over-the board experiences.
Ris is well known for his theoretical knowledge and overall opening expertise. And we are quite convinced that he provides Sicilian players with an up-to date arsenal for playing the Sveshnikov.
Variations:
I have decided to split the book into six parts and would like to elucidate my choices:
1) Dynamic Line 9.Bxf6 gxf6 10.Nd5 f5 11.Bd3 Be6
When I started learning the Sveshnikov, 9.Bxf6 was considered to be posing Black some serious challenges. After 9.Bxf6 gxf6 10.Nd5 I had a hard time deciding whether to recommend the Main Line with 10…f5 or Novosibirsk Variation arising from 10…Bg7 11.Bd3 Ne7. The latter option currently enjoys some popularity as it was played amongst others by Magnus Carlsen in 2019, but 10…f5 has proven itself still to be a very reliable continuation for Black. Hence, I didn’t feel the need to change my original choice. I hope you will enjoy the complicated middlegame battle as much as I do!
2) Dynamic Line without 11.Bd3
Apart from the Main Line with 11.Bd3, White has several other interesting options to navigate. In this second part both possible piece sacrifices on b5 have been examined, while most of the games cover the structures with exf5. The general consensus is that Black’s bishop pair very well supports the pawn centre and White isn’t able to put Black under pressure. Special attention should be paid to Topalov- Carlsen where I’m recommending 16…e4!?, instead of the more common moves 16…Ra7 and 16…Kh8.
3) Positional Variation 9.Nd5 Be7 10.Bxf6 Bxf6 11.c3 Ne7
The Positional Variation with 11.c3 is quite a popular choice for White players aiming for a solid position and enjoying the long term advantage of the weakened d5-square. Black has several possible setups based on moves like …0-0, …Rb8, …Bg5 in all sorts of move-orders. My recommendation is 11…Ne7, a line which has always been considered to be somewhat inferior to Black’s other options, but in my opinion it’s perfectly playable. The system has been played by World Champion Magnus Carlsen and other experts like Krasenkow, Reinderman and Lagarde.
4) Positional Variation 9.Nd5 Be7 10.Bxf6 Bxf6 11.c4
For quite some time I considered this to be one of the most unpleasant lines to face for Black. Based on early games I had been fearing a lack of counterplay, but the selected games have changed my mind. The d4 square, the weakened dark squares and possible counterplay on both wings ensure sufficient counterplay to compensate for White’s firm grip on the d5-square.
5) Modern Main Line 7.Nd5
Since from a theoretical point of view White isn’t really getting anywhere in both the dynamic (9.Bxf6) and the positional Line (9.Nd5), White players started to look for new ways to tackle the Sveshnikov. At the end of 2018, Vladimir Kramnik employed the early knight jump 7.Nd5 and it’s fair to say that since the World Championship match between Fabiano Caruana and Magnus Carlsen this has become the new Main Line. After 7…Nxd5 8.exd5 Black has to decide whether to retreat the knight to b8 or e7. Although I believe b8 to be positionally more sound, I do very much like the complex dynamic struggle which arises from the knight’s transfer to the kingside and believe it offers Black better practical chances to play for a win.
6) Early Deviations
It’s important to know what to do against the sidelines as well. These sidelines aren’t as bad as their reputation, and in fact, if you come unprepared they might cause Black some problems. It makes sense to study them as seriously as the other variations and avoid any unpleasant surprises.