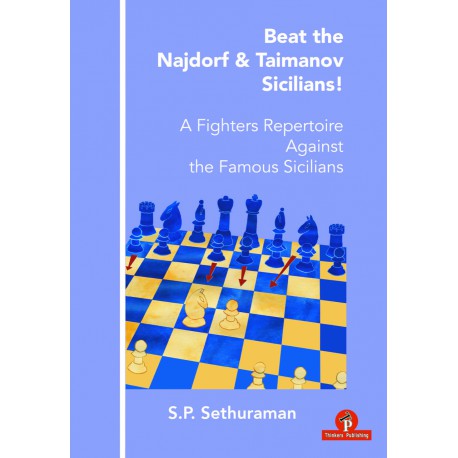 Sethuraman - Beat the Najdorf & Taimanov Sicilians! Livre en anglais sur plusieurs variantes de la Sicilienne au jeu d'échecs. From the first moment (about a year ago) when Mr. Daniel Vanheirzeele from Thinkers Publishing contacted me about the possibility of writing an opening book, I was really excited about the prospect.

Sethuraman - Beat the Najdorf & Taimanov Sicilians! Livre en anglais sur plusieurs variantes de la Sicilienne au jeu d'échecs. From the first moment (about a year ago) when Mr. Daniel Vanheirzeele from Thinkers Publishing contacted me about the possibility of writing an opening book, I was really excited about the prospect. Writing a chess book was a completely new direction for me, and anything new excites me and gives me a high. Then after some discussion we narrowed the topic down to 1.e4 (‘Best by test’) and I found myself with a contract to cover two major variations within the Sicilian: the sharp Najdorf and the trendy Taimanov.
I actually already had a decent reputation as a dangerous theoretician on the white side of 1.e4, and in particular against these two openings. I had shown some interesting ideas in my games over the years which were the result of my real passion for opening knowledge, a trait which has stayed with me throughout my chess career.
From a very young age I had this incurable curiosity about intricacies in the opening. One memorable episode, of which I remain proud even today, occurred when I was 13 years old. I had been watching the game Karjakin – Anand at Wijk aan Zee 2006, in which Vishy unleashed a fascinating novelty with 24…Nc7. After watching that game I was unable to sleep and I began to analyze the crazy, razor-sharp English attack for hours and hours. I found some very interesting ideas and shortly afterwards I showed them to my coach GM R.B.Ramesh (a very famous, world-class trainer) in a training session. There were, in total, 20 pages of analysis based upon the game! He was stunned by the level of detail as it was not normal for a thirteen year old in those days to create such in-depth analysis (of course now it’s a different story as people regularly become Grandmasters at the age of 13!).
From that time on I’ve been consistently cementing my reputation, especially among my fellow Indian Grandmasters, as an opening expert. I have real insights to impart from the many years of work and so it was a no-brainer for me to seize the opportunity to write a book and share my knowledge with the readers.
The only remaining hurdle was the time factor. Being an active and ambitious player, I had many tournaments lined up on my schedule and was not sure when I could find time to work on this project, since it was clear that it would be a sizeable undertaking. Second thoughts crept into my mind at some point, but once I got started on the work, I built up a lot of momentum. In both the openings, I’ve worked tirelessly to find new paths and provide fresh perspective.