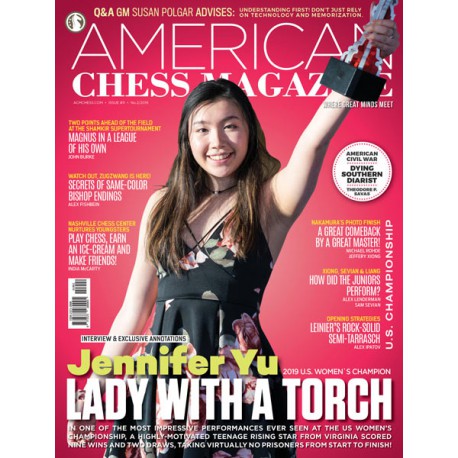 NAKAMURA’s PHOTO FINISH: A GREAT COMEBACK BY A GREAT MASTER!

When needing a massive score, opening choices matter a lot – particularly with the black pieces!

Xiong, Sevian and Liang under the scope of the National team’s coach: How did the juniors perform in Saint Louis?

17-year-old Jennifer Yu wins her first title 2½ points ahead of the field!

Lady with a torch

Overview of the individual performances at the 2019 U.S. Women’s Championship: A Word from the Captain

Your views on Jennifer Yu’s convincing performance at the 2019 U.S. Women’s Championship

Musings of an American Grandmaster

American Chess in the Melting Pot

Readers' voices: Fischer Random – should it be treated equally with traditional chess?

IN A LEAGUE OF HIS OWN

PLAY CHESS AND EARN AN ICE-CREAM… OR EVEN BETTER – MAKE FRIENDS!

A dying southern diarist and a fascination with chess

Fresh Leaves from the Bookshelf

Results from near and far...