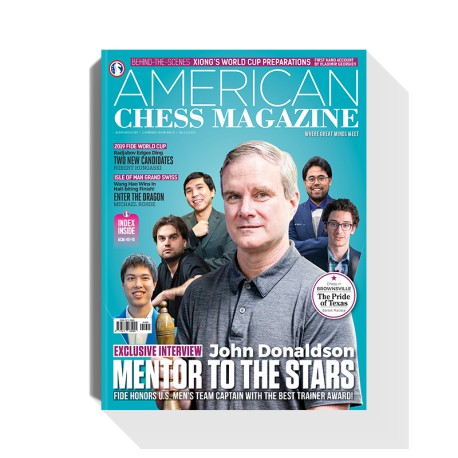 In an exclusive interview, America’s Mr. Chess, John Donaldson, shares memories from his rich chess career as a team captain – a true legacy that will live on for many generations to come.
The cover of the ACM’s combined #14-15 issue boasts a portrait of U.S, team captain IM John Donaldson, as well as members of the most successful American Men’s Olympic squad in history. In recognition of the team’s epic achievements in winning gold and silver medals in 2016 and 2018, respectively, Donaldson has now been presented with the best trainer award by the FIDE Trainers’ Commission. In an exclusive interview, America’s Mr. Chess shares memories from his rich chess career, not only as a team captain/trainer, but also as an organizer, author and publisher of books and magazines - a true legacy that will live on for many generations to come.
One of the most important tournaments in the World Championship cycle, the World Cup, held in Khanty-Mansiysk, is covered by GM Robert Hungaski with a special focus on the winner Teimour Radjabov and the runner-up Ding Liren, who, incidentally, will both be competing in the forthcoming World Championship Candidates tournament.
The performance of each of the U.S. representatives is also individually assessed, in particular that of the most successful American player GM Jeffery Xiong, who has had a fantastic 2019 in terms of both results and overall progress. Here we examine Jeffery’s play from the perspective of pre-game preparation - a true “behind the scenes” story revealed by his coach Vladimir Georgiev.
Another major tournament report comes from GM Michael Rohde who provides extensive coverage of the FIDE Chess.com Grand Swiss Open played on the Isle of Man. Here, the denouement came about in a dramatic last round scenario which resulted in Chinese GM Wang Hao scoring a surprise overall victory on tie-break from Fabiano Caruana and thereby qualifying for the next Candidates tournament. The performances of other U.S. players are also covered as are some rather curious and even amusing episodes from the tournament.
Looking back, our authors faced the difficult task of presenting the most significant chess highlights of the past year.