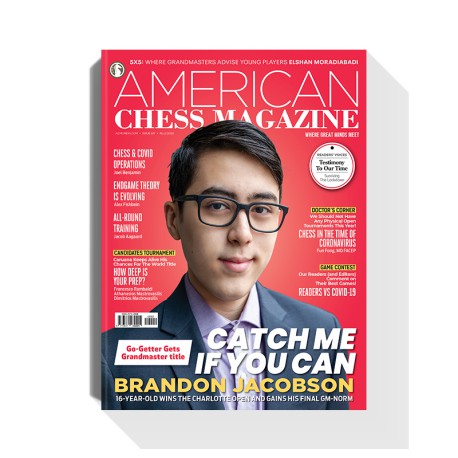 American Chess Magazine n° 17 (n°2/2020). Revue spécialisée en anglais sur le jeu d'échecs.
AGo-Getter Gets Grandmaster title: 16-year old Brandon Jacobson from New Jersey wins the Charlotte Open and gains his final GM-norm
The remarkable young man portrayed on the cover of ACM #17 is none other than the latest American Grandmaster – Brandon Jacobson. Brandon’s best chess results were achieved after he was accepted at the prestigious Columbia University at the age of 14(!). Here, exclusively for ACM, Brandon tells the story of his journey towards the elite chess title. His own analyses of key games, in which he had to overcome serious challenges, are highly instructive and will surely be an inspiration for any other go-getter on a similar quest. In the interview that follows, Brandon talks about his teenage experiences both in chess and life, while emphasizing the importance of family support.
The global COVID-19 pandemic has now forced a shutdown of over-the-board competition, which even included a premature termination of the FIDE World Championship Candidates. Nevertheless, grandmaster brothers Athanasios and Dimitrios Mastrovasilis present round-by-round reports and thorough annotations to almost half of the games that were actually played in this most important chess event of the year. Moreover, GM Francesco Rambaldi turns the spotlight on an energetic opening idea with which Fabiano Caruana was able to score his solitary but crucial win in the event to keep alive his chances of a re-match with Magnus Carlsen for the world title.
The drastic effects that the coronavirus has had on chess, as well as life in general, are underlined by an ER physician who works on the front line in the fight against this invisible enemy － MD Fun Fong, a long time chess organizer, president of the Georgia Chess Federation and a candidate for the USCF Policy Board. Undoubtedly Dr. Fong’s professional views on the present pandemic and recommendations for any possible future return to OTB chess will represent welcome guidance to both organizers and competitive players across the nation.
On the eve of international lockdown, GM Joel Benjamin ventured a chess trip to Prague, where he and his fellow U.S. veterans proceeded to repeat their victory in last year’s World Senior Team Championship. They then faced an even bigger challenge of getting back home because of major flight cancellations…

In the absence of tournament games due to the present crisis, we decided to organize a different kind of chess competition for which we asked our readers to submit for possible publication their best, favorite or most dramatic game, together with their own annotations. The winner’s name will be revealed firstly by email and then announced publicly in our next issue. While the main purpose of our game contest was to give readers an opportunity to showcase their own brilliant play in the ACM, it was undoubtedly also to provide an excuse for ACM staff to prove that they too can actually play chess
In his regular column, GM Jacob Aagaard again challenges readers to solve a fresh selection of examples from practical play, highlighting strategical elements that will be useful for any aspiring player.
Our endgame expert GM Alex Fishbein was personally involved in the revision of Dvoretsky's Endgame Manual, an absolute classic now in its fifth edition. By means of several fantastic examples, Alex explains the main motifs of knight endgames and improvements on “endgame theory” which he discovered when carrying out his work on this new version.
Then Jon Edwards gives readers tips on how to survive the lockdown – and not just from playing on the internet. Those who want to enjoy the social side of chess are recommended to follow podcasts as well as pursuing other interesting channels.
As usual, FM Carsten Hansen reviews ten recently published books that have caught his eye – and there are some real gems here!
Finally, GM Elshan Moradiabadi is the guest speaker in our regular column “5x5 Where Grandmasters Advise Young Players”.

10 READERS' VOICES
Testimony to our time
CHESS HAS SURVIVED MANY PANDEMICS AND IS STILL GOING STRONG!

26 Candidates Tournament Round by Round
Maxime Vachier-Lagrave tops the field at the halfway mark
HE CAME OFF THE BENCH – AND SCORED A WINNER!
GM Athanasios Mastrovasilis & GM Dimitrios Mastrovasilis

55 CHESS PUZZLES
Can you solve the riddle of the Sphinx?

56 Musings of an American Grandmaster
CHESS LIFE IN THE TIME OF CORONAVIRUS, OR COVID OPERATIONS
GM Joel Benjamin