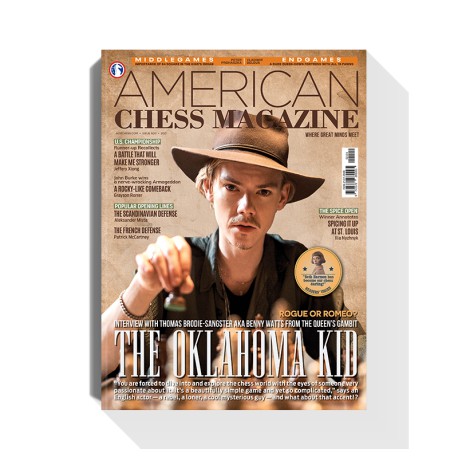 American Chess Magazine n° 20 (n°1/2021). Revue spécialisée en anglais sur le jeu d'échecs.
We are devoted to chess in America without forgetting what’s going on in the chess world at large. We cover national events and encourage reporting on chess in individual states. We do in-depth interviews, behind the scenes reporting and have great grandmasters writing notes that actually explain what’s going on.
American Chess Magazine is "the chess magazine that the chess world needs and deserves!". The winner of six awards and five honorable mentions by the Chess Journalists of America in 2018, this large, beautifully produced magazine not only brings a slew of articles on events with deeply commented games, but includes columns by such legendary players as Seirawan, So, Shahade, Benjamin, Sokolov and many more! If you're interested in American Chess, look no further than American Chess Magazine.
This is the chess magazine, America, in its chess renaissance, deserves. And we will consider it a great compliment if readers find it worthy to share the American Chess Magazine with their friends, exhibiting the same pride they feel in being members of the American — and indeed worldwide — chess community!
American Chess Magazine #20 boasts a photo of actor Thomas Brodie-Sangster aka Benny Watts from the Netflix hit series The Queen's Gambit.