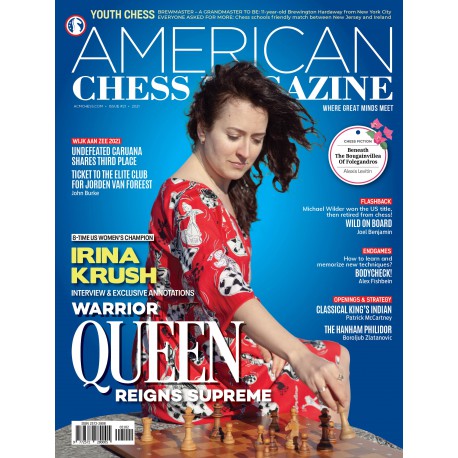 American Chess Magazine n° 21 (2021). Revue spécialisée en anglais sur le jeu d'échecs.
We are devoted to chess in America without forgetting what’s going on in the chess world at large. We cover national events and encourage reporting on chess in individual states. We do in-depth interviews, behind the scenes reporting and have great grandmasters writing notes that actually explain what’s going on.
American Chess Magazine is "the chess magazine that the chess world needs and deserves!". The winner of six awards and five honorable mentions by the Chess Journalists of America in 2018, this large, beautifully produced magazine not only brings a slew of articles on events with deeply commented games, but includes columns by such legendary players as Seirawan, So, Shahade, Benjamin, Sokolov and many more! If you're interested in American Chess, look no further than American Chess Magazine.
This is the chess magazine, America, in its chess renaissance, deserves. And we will consider it a great compliment if readers find it worthy to share the American Chess Magazine with their friends, exhibiting the same pride they feel in being members of the American — and indeed worldwide — chess community!
American Chess Magazine #20 boasts a photo of actor Thomas Brodie-Sangster aka Benny Watts from the Netflix hit series The Queen's Gambit.

The lady who lights up the cover page of our issue #21 is a true chess warrior queen – 8-time U.S. Women’s Champion, GM Irina Krush. How the game of chess impacted her character development and general approach to life? What is the secret of her “champion nerve”?

There’s a lot to be learned not only from Irina’s game annotations but also her mental attitude and approach to decision-making at critical moments. We present you Irina’s own account of how she overcame challenges on the way to winning her 8th national championship title. “I don’t think I was born with any ‘champion nerve’ but I was a willing student, and the game of chess is a good teacher” says Irina in an exclusive interview, enriched with wonderful photos taken in a special shoot organized by ACM in New York City.
The 2020 U.S. Junior Champion, GM John Burke, reflects on the traditional super-tournament in Wijk aan Zee, where Fabiano Caruana was warming-up for the Candidates. True to his style, Burke provides lavish annotations to a selection of particularly interesting games from this event.
A further installment of our regular column identifying the historical genesis of chess openings and their names deals with the Classical King’s Indian Defense. Patrick McCartney manages this difficult task by clearing a pathway through the major variations of what is an extremely complex opening.
Pete Tamburro provides an overview of the World Amateur Team Championship/USATE, well-known as one of the major tournaments on the U.S. chess scene. There is a very special story attached to this year’s winners and the team spirit that has led them to eventual success. The organizers made an extra effort to hold the tournament, rather than canceling it, by staging it online for the first time. As TD Steve Doyle put it in our interview, what mattered most was that “chess kept going.”
Our resident endgame expert GM Alex Fishbein explains how best to memorize specific motifs by naming them after vivid metaphors. ACM readers have become accustomed to the highly instructive tone of Alex’s writings and the seriousness of his work, but this latest article will certainly offer an equally high level of excitement and entertainment.
In an extraordinary story, filled with personal reminiscences, GM Joel Benjamin presents his “best friend from half a life ago” – GM Michael Wilder. After going through a selection of Wilder’s games, chess fans will surely feel a sense of regret that such a fine player retired from chess way back in the late 1980s!
GM Jacob Aagaard presents another selection of testing positions taken from practical play that have attracted his attention and to these we have added nine tactical puzzles to further enhance your personal chess training sessions.
IM Boroljub Zlatanovic tackles knight maneuvers in the middlegame. Curiously enough, the types of positions in which these maneuvers occur carry the chess legacy of an American Major, a strong player and respected personage in U.S. chess from over 100 years ago! Hopefully these lessons, combining strategy and history, will be enjoyed by those who appreciate the way knights can work wonders in chess.
Of course, we haven’t forgotten the younger generation. In the absence of over-the-board competitive play and its valuable social element, top students from two chess schools on different sides of the pond, one from New Jersey (USA) and one from Dublin (Ireland), contested an online match – and this resulted in a memorable experience not only for the youngsters and parents but also the teachers.
Grayson Rorrer continues the accent on youth with a profile on an eleven-year-old fellow National Master from NYC who has already played in over 250 rated tournaments – wow!
A different view of chess follows with another fine piece of fiction by Alexis Levitin – a story that he claims to be his personal favorite!
Then comes the second part of an article by GM Peter Prohaszka, which was inspired by an endgame gem from 50 years ago.
We conclude with current Chess Tech developments highlighted by Jon Edwards and FM Carsten Hansen’s regular reviews of ten newly released titles.