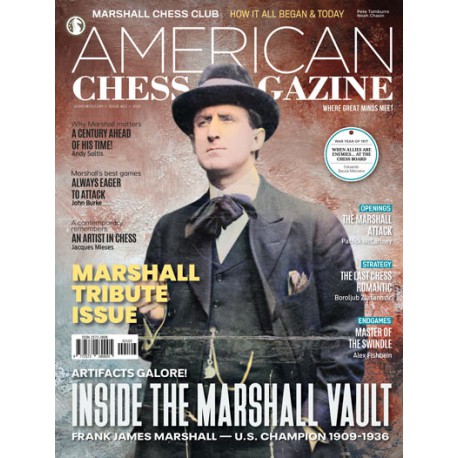 American Chess Magazine n° 22 (2021). Revue spécialisée en anglais sur le jeu d'échecs. American Chess Magazine #22: MARSHALL TRIBUTE ISSUE
Frank James Marshall is a U.S. Hall of Fame chess legend – a grandmaster who held the title of American champion from 1909-1936! Now our jam-packed issue #22 reveals many surprising facts about Marshall’s life both on and off the chess board. Furthermore, by unlocking a wealth of artifacts from the Marshall Chess Club vault, readers will not only gain a greater appreciation of this wonderful player but also a deeper understanding of the lasting legacy he has left the chess world.
Was Marshall a swindler or an uncompromising attacker? How good was he at defense or in the endgame? What were his finest achievements in chess – and also in life? What kind of reputation did he have then, and how is his legacy viewed today?
In order to answer these questions we start with a contribution from prolific chess writer GM Andy Soltis who offers a modern perspective on Frank Marshall - with pragmatism being perhaps his most predominant characteristic. “He had an awful lot in common with Carlsen, Polgar, Caruana – and Nakamura. He was a century ahead of his time,” writes Soltis as he explains what you can learn from Marshall’s games.
With regard to Marshall’s playing style, the reigning U.S. Junior Champion, GM John Burke, provides in-depth analysis of a personal selection of the former champion’s best games. Then chess historian Eduardo Bauza Mercere follows Marshall’s footsteps during the year 1917 to get an idea of his typical routine. IM Boroljub Zlatanovic continues with an analysis of more than 30 of Marshall’s games, providing instructive comments which highlight both the virtues and shortcomings of his play. Also included are a couple of games from Marshall’s greatest tournament triumph, Cambridge Springs 1904, where the annotations are enriched with the maestro’s original notes.
Moving on, GM Alex Fishbein presents a fascinating selection of endgames in which Marshall demonstrated his surprising skills. Then comes a further array of Marshall’s notable games annotated by IM Slobodan Mirkovic.
The tribute proceeds with a selection of Marshall’s best combinations, presented in the form of chess puzzles for readers to solve and perhaps conclude that Frank Marshall was one of the last true chess romantics.
Marshall also left an indelible mark on the development of chess opening theory, particularly the Marshall Attack in the Ruy Lopez for which Patrick McCartney provides a historical survey. The fact that more than a century after it made its debut the Marshall Gambit is still seen in competitive play is testimony to its eternal flame. Similarly, our Consulting Editor, Pete Tamburro, sheds light on the “other” Marshall Attack, which the legendary American champion first employed in Paris 1900 to crush the ever solid Queen’s Gambit Declined. This original idea was later adopted by others, including that great attacking player, Rudolf Spielmann.
Probably the greatest legacy of Frank Marshall off the chess board is his founding of a chess club in New York City in 1915. Pete Tamburro provides a survey of the Marshall Chess Club from its origins up to Marshall’s death in 1944. Then the Club’s President, Noah Chasin, picks up the story and carries it forward to the present day. To complete our coverage of the Club’s history, we hand over the reins to the iconic IM Jay Bonin, who has been a member for nearly 50 years! A large collection of photos and artifacts found in the Marshall Chess Club vault, as well as from private collections, make this a very special issue of ACM, highlighting what a great personality, player and promoter Frank Marshall really was.
To appreciate the respect Marshall enjoyed in his lifetime, we have reproduced an obituary by GM Jacques Mieses with its haunting finale, while also adding tributes from sources around the world at the time of his passing. Then again, from a present-day viewpoint, three respected and knowledgeable chess specialists, Joshua Anderson, Dan Heisman and Andy Ansel give their personal views on Marshall’s legacy and its enduring significance.
For those who enjoy chess literature, FM Carsten Hansen presents his regular reviews of ten newly released titles as well as making personal recommendations on books authored by and written about Frank Marshall. To supplement this, some useful hints are offered for book collectors.