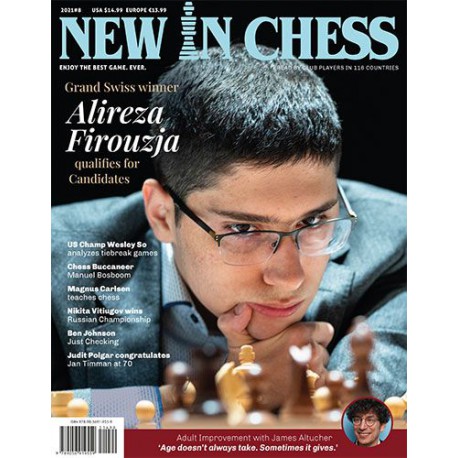 6 NIC’s Café
Can you do what it sounds like in Blitz Society, the new chess-themed hotspot in Paris?

8 Your Move
Chess960 has a huge following. But isn’t Chess15 a much better idea, our Letter of the Month wonders.

14 The tale of the tape
A match preview in facts and figures.

22 Meltwater Tour Final
Magnus Carlsen alternated brilliancies with lesser moments, but the bonus points that he had started with proved to be a comfortable cushion.

34 Interview
Magnus Carlsen has thought about it: ‘My biggest advantage in the match is that I am better at chess.’

47 Fair & Square
Acclaimed playwright Tom Stoppard knows what he will do if he retires.

48 Adult improvement
Is it really possible? James Altucher tells you how to go about it.

50 War with pieces
Anish Giri was unstoppable in the Tolstoy Memorial at Yasnaya Polyana.

60 It’s not over till…
His start was slow, but then Magnus Carlsen scored four straight wins to win Norway
Chess ahead of Alireza Firouzja and Richard Rapport.

74 Nona’s Gambit
Nona Gaprindashvili feels insulted by a comment in The Queen’s Gambit and has filed a lawsuit against Netflix.

78 Magnus Carlsen teaches chess
Does the rook always belong behind the pawn in the ending?

87 What would you play?
Test your decision-making skills with Thomas ‘Toolbox’ Willemze.

92 Sadler on Books
Our book reviewer looks at the latest harvest.

105 They are The Champions
Victor Ebosse Kingue is the national champion of Cameroon.