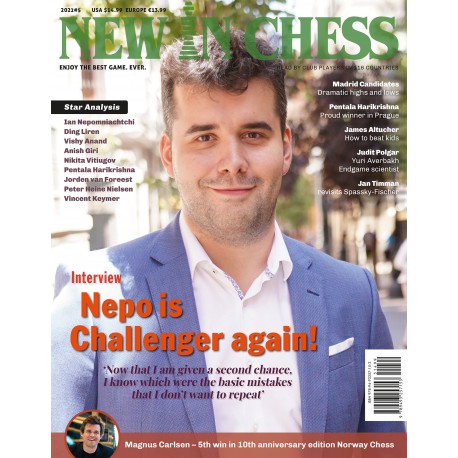 6 The Nation’s Gambit
A best-selling Norwegian thriller with a mind-blowing chess plot seems destined to be turned into a movie.

8 NIC’s Café
Do you remember Beth Harmon playing chess with the pieces appearing upside down on the ceiling of her bed room? Now you can play that game too!

10 Fair & Square
‘It doesn’t take much insight into human nature to predict that Fischer will not be world champion for long’, Hein Donner rightly predicted.

12 Your Move
Fifty years ago Leon Arden felt like Alice in Wonderland while visiting Reykjavik.

14 Look who’s winning (again)
His name was rarely mentioned among the favourites, but once the Madrid Candidates Tournament got underway all the stars were aligned for Ian Nepomniachtchi’s sensational runaway victory.

44 Interview: Ian Nepomniachtchi
In a candid interview the Challenger speaks about the lessons learned from Dubai, the tireless support from his team, his thermos flask, chess players as actors, and his hope that Magnus Carlsen will play the match.

52 Party time in Stavanger
Norway Chess celebrated 10 years of elite chess with another victory of the man who started it all. Magnus Carlsen claimed his fifth title with flashes of the kind of stellar chess that should take him to 2900 one day.

68 Adult improvement
Wondering how he can beat the young kids that are omnipresent in tournaments, James Altucher tries several suggestions before he reaches a sobering conclusion.

70 Hurray for Hari
In the last round of the Prague Masters, Indian GM Pentala Harikrishna, who has been living in the Czech capital for some years now, edged out Le Quang Liem to take first prize – undefeated and with a 2858 rating performance.

83 What would you play?
Test your decision-making skills with Thomas ‘Toolbox’ Willemze.

88 Endgame scientist
Yuri Averbakh passed away at the venerable age of 100 in Moscow on May 7th of this year. Judit Polgar looks at his passion for the endgame.

92 Sadler on Books
Many of today’s chess books take a lot of time to fully appreciate them. Our reviewer even took a day off from work to delve into the new book of Mickey Adams and Philip Hurtado (5 stars!).

105 They are The Champions
Michalina Rudzinska is the national women’s champion of Poland.

106 Just Checking
Does Allard Hoogland have any superstitions concerning chess?