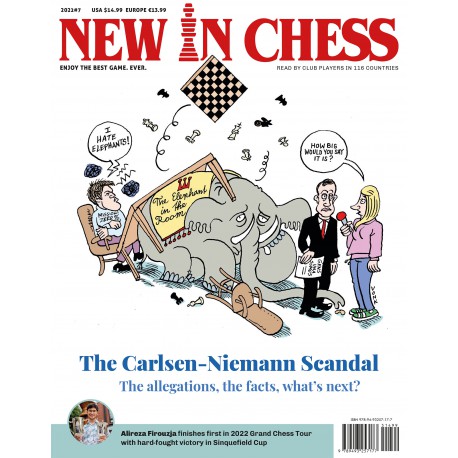 7 Sportsmanship
If cheating is not recommended, then what is?

10 NIC’s Café
The president of the Norwegian chess federation confesses to have cheated online and resigns.

12 Fair & Square
Games are for fun, life is for real, says Teimour Radjabov.

13 Your Move
Marc Lemelin doesn’t want to fall in love a third time.

14 A move heard round the world
Playing sparkling, bone-crushing chess, Magnus Carlsen won the Julius Baer Generation Cup with a record score. Yet, it was a game that he didn’t play, a one and a half move ‘loss’ to Hans Niemann, that made headlines.

38 The Day Carlsen Quit
Alireza Firouzja won both the Sinquefield Cup and the overall Grand Chess Tour. Yet, hissuccess didn’t make headlines. The press worldwide jumped on another 19-year-oldtalented kid, Hans Niemann, speculating whether or not the American had cheated afterMagnus Carlsen withdrew from the event.

62 Adult improvement
Writing about cheating, talent and wisdom, James Altucher comes to the conclusion that chess is a much more beautiful game than he ever realized.

65 What would you play?
Test your decision-making skills with Thomas ‘Toolbox’ Willemze.

70 Zukertort’s breakdown
Johannes Zukertort’s sweeping win in London 1883 was all the more amazing given the fact that he lost his last three encounters. Why? Willy Hendriks comes up with a remarkable explanation.

82 Instincts and reflexes
Genna Sosonko looks at a ‘stunning’ move from the World Championship of 1969.

86 Dominating in the endgame
Few greats have made as big a contribution to our knowledge of the endgame as YuriAverbakh. Judit Polgar has been a fan of his work from childhood,

90 Sadler on Books
As the UK mourned the passing away of their queen and the chess world found itself in turmoil by an act of their king, Matthew Sadler looked for diversion in an assortment of newly arrived chess books.

96 Superlative depth
The most successful young Indian this year has been 19-year-old Arjun Erigaisi. Jan Timman looks at recent games of a phenomenal player, who is modest in demeanour, but merciless on the chess board.

105 They are The Champions
Enkhtuul Altan-Ulzii is the national women’s champion of Mongolia.