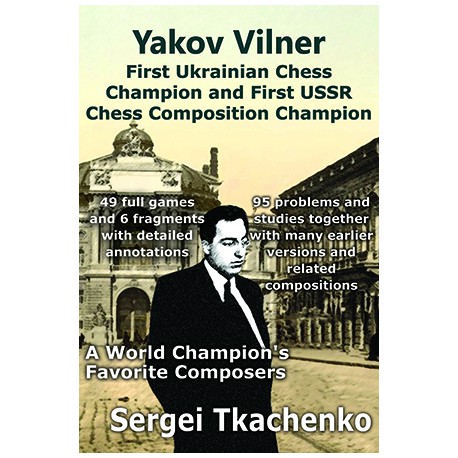 Vilner - First Ukrainian Chess Champion and First USSR Chess Composition Champion: A World Champion's Favorite Composers. Livre en anglais sur le GMI Yakov Vilner. Yakov Vilner (1899-1931) was one of the leading Soviet chess masters in the 1920s. He won the Ukrainian championship three times (1924, 1925 and 1928), the Odessa championship five times (1918, 1923, 1925, 1926 and 1928) and competed in five USSR championships, his highest position being sixth equal in 1924. His attacking, combinational style delivered many memorable games and he regularly played against strong contemporaries such as Bogoljubov, Romanovsky, Bogatyrchuk, Verlinsky and an upcoming teenager called Botvinnik.
Vilner was also a leading chess composer. He won the USSR composition championship for three-move problems in 1929 and in total he won prizes at 30 chess composition competitions.
In this historical work illustrated with rare archival photos from the period, Sergei Tkachenko tells the story of a man who, despite suffering constantly from the respiratory illness that would eventually end his life at the age of just 31, was a leading chess organizer and journalist in Ukraine as well as a player and composer, against a background of major social and political upheaval that significantly impacted the chess world. It was Vilner who, in 1919 as a member of the Revolutionary Tribunal in Odessa, managed to save Alexander Alekhine from the firing squad, which Tkachenko wrote about in his book Alekhine's Odessa Secrets: Chess, War and Revolution. The latter work was short-listed for the 2018 English Chess Federation Book of the Year.
Tkachenko has selected 49 full games and another six fragments, annotated in detail by Vilner himself, Tkachenko, Romanovsky, Bogatyrchuk, and other leading players of the 1920s. The author has also included all 95 of Vilner’s known problems and studies, some of which are fairy problems, as well as many earlier versions and related compositions. Like in Tkachenko’s other collections, all 95 compositions are set on the right-hand side of the page with the solution overleaf.
This book will be of great interest to fans of Soviet chess history, exciting games collections and problem solving.