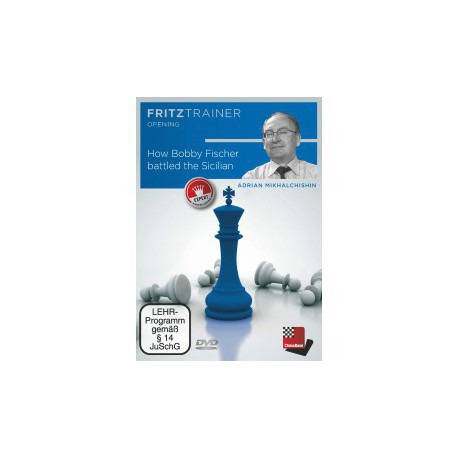 DVD Mikhalchishin - How Bobby Fischer battled the Sicilian. Logiciel en anglais sur le GMI Bobby Fischer. Bobby Fischer was a devoted Sicilian player. But the American chess genius and 11th World Champion was also a devoted 1.e4 ("Best by test" as he said) player, and his results against the Sicilian are remarkable. In almost all variations he came up with new ideas and developed systems of his own - such as 6.Bc4 (one of his petmoves) against the Najdorf, and the Rauzer. Fischer liked to play aggressive but basically sound lines against the Sicilian and many of his variations are still very much alive and a good choice for players of all levels.
o Najdorf o Accelerated Dragon
o Sozin-Attack o Rossolimo
o Paulsen/Tajmanov o Minor Sicilians
o Rauzer-Attack

o Video running time: 4 hours (English)
o Interactive training including video feedback
o Extra: Database with games of Fischer versus the Sicilian
o Including CB 14 Reader
Adrian Mikhalchishin, a Grandmaster since 1978, is currently among the top 5 world trainers and the Chairman of the FIDE Trainers' Commission. He trained the team of USSR in 1980's, national teams of Slovenia, Poland and the Netherlands, and was the trainer of Anatoly Karpov (1980-1986), trained Zsuzsa Polgar, Alexander Beliavsky, Maja Chiburdanidze, Arkadij Naiditsch and Vassily Ivanchuk.